Next: Evil Twins on the Road

This weekend, the Evil Twins hit the road for a three-bout non-bracketed tournament in St. Louis, MO.  Skate to Thrill is produced by the St.Chux Derby Chix, and if last year’s experience is any indication, it should be a thrilling weekend of roller derby! Interested in coming to watch?  Tickets for Skate to Thrill are available here. $10 for a day pass, $18 for both Saturday and Sunday (individual bout tickets are not available). 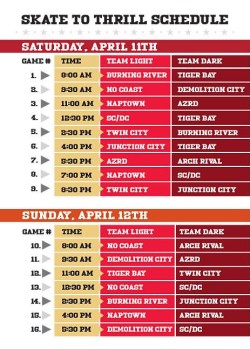 TCDG has played Burning River once before, at the very top of the 2013 season. We lost 189-145, but two years ago seems like a lifetime ago in derby years!  At that point, Burning River ranked 12 places above TCDG, and the final score still felt like a win to the team. We all look forward to playing them again this year — not once, but twice, as we’ll see them again in May as part of a two-bout weekend in Cincinnati.

TCDG hasn’t faced Junction City or Tiger Bay previously, but looks forward to both opportunities to play these tough teams coming from such great distances to take part in the tournament.

We’ll be posting brief updates during the weekend with scores, so stay tuned!

And if you’re on Instagram, be sure to follow us there for images from TCDG skaters and other members on the road and off the track!

p.s. Wondering when you can next catch TCDG at home?

We’ll be playing the Capital City Hooligans on April 19 at Skateland!
Women vs. men on the flat track — you don’t want to miss this one!! 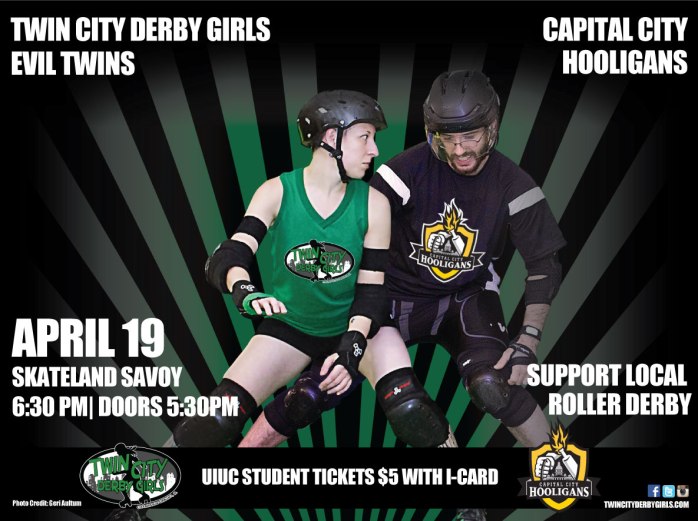 Category: Evil Twins, Next, On the Road